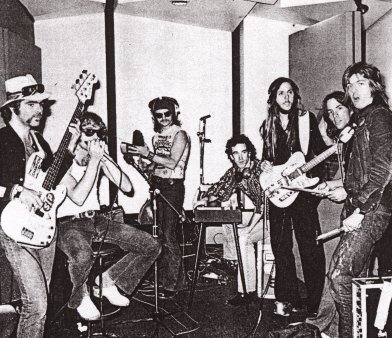 As far as anticipation goes, this album has been high on my list ever since that memorable Roundhouse gig where Clover were sandwiched between a rather nervous Plummet Airlines and a rather bizarre Mallard.

I gather that I'm one of the few lucky people to possess Clover's two Fantasy albums from seven or eight years ago, so I wasn't really prepared at first for the change of direction in the group. However, I'm certainly not complaining...

During the six month or so that the group has been resident here, (down the road apiece at Headley Grange, where Help Yourself used to live), they've changed some more. 'Chicken Funk', a raucous little number with a dance performed on stage by Sean Hopper and Hughie Louis, started off as the highlight of their set - due mainly to the motion rather than the aesthetic niceties of the song - but when it was released as their first British made single, (on Mercury, by the way, rather than Vertigo), it stiffed, because it didn't stand up without the action.

So when I was mcgrooving up in Glasgow recently and saw Clover supporting the excellent Lynyrd Skynyrd, their set was a much more measured affair, honed to a reasonable edge, instead of the blunt and erratic cudgel evident at the end of last year.

Gone was 'Chicken Funk', and also, unfortunately, their epic accapella version of 'Chain Gang' (as in Sam Cooke not Jimmy Young, for the benefit of our older readers), but there were several neat new songs, and a lot of them are included on this album, which is produced by Robert John Lange of Graham Parker fame.

It's eclectic, certainly, and only at the end of side two does the expected country sound make an appearance, with 'Santa Fe', an excellent track indeed, bringing to mind the Clover of yore and also sounding not unlike a rather good Eagles or Pure Prairie League.

'Show Me Your Love', the final track on the album, sounds a little Nesmithian instrumentally, but they're the only two obviously country cuts...unless, of course, you care to count the two unashamedly romantic ballads - 'I Lie Awake And (And Dream Of You'), the extraordinarily under-rated single, and 'Leavin' Is' - but I think they're something else again, roughly approximate to the fine music of, say, Don Williams. A different sound, but the same accessibility.

Then there's 'The Storm'. I'm not sure about it yet, because despite the fact that it seems to come from the same area as Steve Miller's more reflective work, it probably goes on a little too long. If you've seen the group on stage, you'll know that they indulge in an amount of what might be termed as white funk...although without a lot of the nastiness that may imply. From that part of the group sound, you can find 'Love, Love' and 'Take Another Look', both of which build up to nice doo-wop vocal endings, and there's also 'Children Of The Street' (* 'Child Of The Streets'), which seems a slightly hackneyed idea.

Which leaves two more, the best and the worst. 'Fairweather Fan' is a very slight song which left very little impression, but 'Streets Of London' (not as in Ralph McTell) is a pleasantly moody piece of homesickness, not unlike the stuff to be found on early (and preferable) Boz Scaggs albums. My suggestion for the next single...

It's quite a story book tale is the rediscovery of Clover, as described in Zigzags 62 and 63, and I believe our new editor is planning an update on their subsequent hopes and fears in the very near future. However, since very few people seem to talk to or about John Ciambotti, I feel I should tell you that his credibility is very high with me, because he used to be in a resident bluegrass group at the Palomino, sharing the residency for a long time with the Kentucky Colonels.

Of course, that doesn't have a whole bunch to do with this album, but I found it interesting, and hopefully that's just what you'll do with the record.