In their 23 years Huey Lewis And The News have sold more than 20 million albums and charted around the globe, but claim they are still misunderstood. Classic Rock looks at a band that have become victims of their own success. Hip square: Hugh Fielder

THERE' S A TWINKLE IN HUEY LEWIS'S EYE AS HE contemplates the damage that 20 million album sales have done to his career. "People think we're a pop band," he says, "but we're not a pop band. Never have been. We just had some huge successes that hurt us a little."

Well, it's not so much the multi-million album sales as the dozen consecutive American Top 20 hits that have irrevocably branded Huey Lewis And The News as a pop band. What's more, they shamelessly contrived to get hits.

"True," Huey replies, without a trace of apology, as he tucks into his tuna salad in the atrium restaurant at London's elegant Landmark Hotel. "Hits are a way to make you hot. When you're hot you learn how to play live to become big. So that when you're not hot any more you're still big. And that's the way it's worked for us."

Fair point. But behind the undeniable class of the records, the band's musical credentials and connections or even their kick-ass live shows, the fact remains that at the heart of The Heart Of Rock And Roll' there's a damn drum machine.

"Correct," Huey agrees, without a shred of guilt or remorse. "I knew the drum machine had great possibilities for us. It was this whole thing about new tech versus our bluesy R&B style melding together. It was the old and the new all at once. We had to use it."


"I didn't play the tapes for a couple of months, and when I did it was a revelation. I went: 'Shocking! 'Heart Of Rock And Roll', 'I Want A New Drug', 'Walking On A Thin Line'... they're just too damn funky. We have to cut them again with a drum machine.

"I worked on the other guys, and they were not happy but I finally convinced them. We went in and set up for 'I Want A New Drug' again and dialled up the Linn machine. Only this time we set it a couple of notches faster. And that made a world of difference. Suddenly it was the most fun thing in the world to play to. We sequenced the bass, overdubbed the cymbals and fills, and it just popped. Then we did 'The Heart Of Rock And Roll' and 'Walking On A Thin Line' and they popped, too."

The irony is that the first hit off 'Sports', 'Heart And Soul', didn't have any drum machine on it. Cynics might argue that it didn't need one, as it was written by Mike Chapman and Nicky Chinn, whose pedigree included Sweet, Suzi Quatro, Mud and Smokie, not to mention Racey. So, no credibility points there either.

"That was my call," Huey admits. "I heard the song and thought, 'That's great. And it's a hit'. It was a hedge-your-bets song, an obvious hit. And we needed one."

'Heart And Soul' served its purpose, in the autumn of 1983 kicking off the hit sequence that ran for nearly five years. It may have looked like an overnight success story, but Huey had been paying close attention for the previous 10 years, and when it came he was ready for it.

Brought up in the 50s in the Bay Area of San Francisco by liberal parents whose house was a regular hang-out for the beat generation ("I'd wake up in the middle of the night and there'd be this raging party going on. I'd wander out into the hallway and Allen Ginsberg would be there, waving his finger cymbals"), Hugh Anthony Cregg III was academically bright. He was set to study electrical engineering at College, before his father sent him bumming around Europe for six months - they didn't have gap years back then.

Somewhere in Europe he took up the harmonica, and by the time he'd reached London's Marble Arch underpass he could earn a crust from busking. By the time he got back to America his outlook had changed. By the beginning of the 70s he'd quit College and was back in the Bay Area, playing with various bluegrass bands before joining a country rock band called Clover - who would later comprise the nucleus of Huey's band The News. 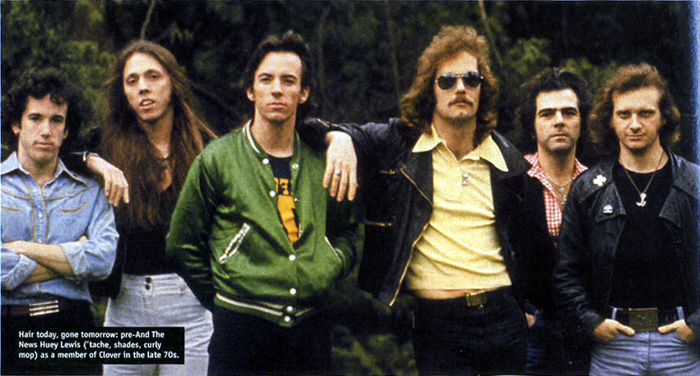 While Clover scraped a living up and down the US West Coast, the two albums they'd recorded for Fantasy (which were ignored in America) became popular among London's burgeoning pub-rock scene and particularly by bands like Brinsley Schwarz (featuring Nick Lowe), Ducks Deluxe and Bees Make Honey.

"One night in 76 we're playing the Palamino Club in LA," Huey recounts, "when in walks Nick Lowe, Jake Riviera and four guys in suits - Dr Feelgood. They've been playing a CBS convention, and Nick has come over as Wilko Johnson's guitar roadie. He lands up sitting in with us, and when we ask what song he wants to play he picks an old one we can barely remember and plays it perfectly. Even sings it. It blew my mind."

Lowe and Riviera convinced Clover that the future was bright in Blighty, and a plan was hatched. But even as the group touched down at Heathrow, the first tremors of punk were being felt in the UK. "The week we arrived I went to see the Clash at the Roundhouse, and the audience are gobbing on them and Joe Strummer is covered in spit, and I'm like, 'What is going on here?!'." Huey recalls.

The tremors weren't yet strong enough to prevent Clover from getting a record deal with Phonogram, but while they were making their album their hosts were busy setting up Stiff Records, and the pub rock scene was changing beyond recognition. Still, at least they had a grandstand view of it all. And they also got their album produced by some obscure Phonogram house producer called Robert 'Mutt' Lange.

That meant they were going to have to produce it themselves. Eventually Chrysalis relented. "No big American label would have let us do that," Huey says. "And that was when we learnt how to make our own records; in fact records in general. My original theory was that if we did a maximum of three takes -just go in and play it as fast as we could - then we'd sound live. What I failed to realise is that it's not live, it's tape. If you want tape to sound live you have to spend time making it live."

The key turned out to be a song by their old mate 'Mutt' Lange called 'Do You Believe In Love', which was Huey Lewis And The News's Top 10 breakthrough in the States. "We all knew it was a radio-type tune," Huey says. "The only question was, could we make it live for us? Because it was very pop - poppier than we'd ever been. But we changed it around and it worked out."

The stakes were higher for the 'Sports' album, but the band were primed and, once they'd learned to love the drum machine, the hits rolled in - five of them off a nine-track album. "I knew we had four or five really good songs," Huey says. "In fact, 'Sports' is only about half a dozen songs deep. And then it just falls apart." 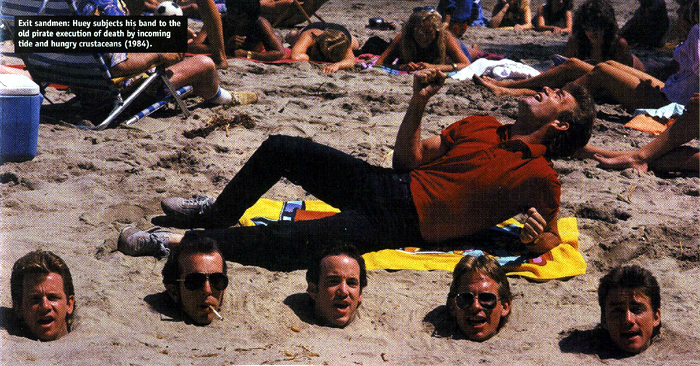 "But once the second one hit I knew the rest would go as well. It was a momentum thing. But the other thing was that there was nothing thematic about the album. I mean, 'Bad Is Bad' and 'Walking On A Thin Line' - what do they have in common? And 'If This Is It' and 'I Want A New Drug? Same thing. Back in the 60s people bought records and they wanted to have different tunes on them. Like the early Beatles albums. It was part of the charm of it."

Along with the charm came the zeitgeist. Huey found himself in a room with Steven Spielberg and associates talking about their movie Back To The Future. "They're telling me about this Marty McFly character [played by Michael J. Fox.], whose favourite band would be Huey Lewis And the News. So would we write some songs for the movie? I said, 'We don't know how to write songs for movies but we'll send you the next thing we write'. Which was 'The Power Of Love'."

The song was an international hit and their first US No.1. Which just intensified the pressure on the next album, 'FORE'. "Yeah, we felt it," Huey admits. "It got the point where we'd worry about every note; I didn't want to leave one bad moment on the tape. We produced that one tits-out."

Pressure turned to panic when Bob Clearmountain was kidnapped by Bruce Springsteen to help build his 'Tunnel Of Love'. Huey and his News ended up mixing 'FORE' by themselves. In doing so they may well have "made a lot of mistakes; some of the drum echoes were so big". Nevertheless, 'FORE' yielded another couple of No.1s and three more Top 10 singles.

IT SEEMED THEY JUST COULDN'T STOP WRITING HITS. "IT WAS ONE of those things where you open the door a little bit and, whammo! After years of A&R guys going, 'I dunno, I'm not sure that's a hit', eventually we start getting hits, and all of a sudden every little ditty we come up with the A&R guy's going, That's a smash!'. And I'm thinking, 'This can't be right'."

And while Huey and The News were perfectly capable of writing 'Hip To Be Square' (too hip for many Americans who didn't get the irony) and 'Stuck With You' themselves, they had no hesitation in using outside songwriters, such as Bruce Hornsby who wrote 'Jacob's Ladder'.

'Small World", in 1988, was a deliberate shift in direction. But it got slammed by the critics for the band having moved away from their roots.

"That hurt," Huey admits. "But it wised me up to a lot of stuff. It was probably good that it happened. What annoyed me was that it was absolutely our best work to date. We were getting better musically all the time; we got the mixes right - the way they should have been done on 'Fore' - and it sounds great. A lot of people reckon 'Small World' is their favourite album."

'Small World' remains arguably Huey Lewis And The News's best album, even if it doesn't contain their best songs. Mind you, 'Perfect World' notched up another top-three hit before the title track broke the sequence, failing to make the Top 20 and trailing the news that the band was no longer hot, just big.

The drum machine served its purpose. But it isn't needed now.